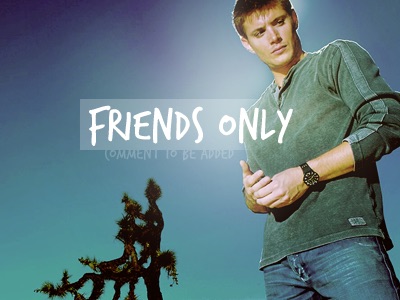 The last two days have been a huge headache, hence not posting. I had to download my Tumblr exports, which totaled 20GB and took ages. And that doesn't account for all the Likes I need to go back through. It makes me tired just thinking about it! Anyway, sorry, long post ahead.

lettered
Author Summary: Harry gets de-aged. Malfoy has to help him.
My Thoughts: This fic is 153k and I wasn't sure what to expect beyond the fact that this author is, in my opinion, trustworthy. And god, did this deliver. This isn't your typical de-aging fic. This was emotionally wrenching, allowed a relationship that was already forming to find a foundation of deeper mutual understanding, and provided a great, well-thought out mystery involving Auror!Harry and Potions Genius!Draco and magical organised crime! I loved it from beginning to end and would definitely recommend everyone read it.

Fic: Ways to Say I Love You by

writcraft (for Festive 500)
Author Summary: Harry says 'I love you.'
My Thoughts: This ficlet was painful and perfect. I don't want to spoil it. Just know that it's romantic and fluffy, yes, but a bit angsty and so realistic and you'll love it.

irrevokable that I must run, not walk.


Fandom
1D: The 2018 Tomlinshaw Fic Exchange starts tomorrow and I AM SO READY!!!!!
1D: That Zayn song isn't my jam, was deliberately shit-stirring and I don't want to talk about it/him OR Louis's responding tweet that every morality-shipping dark larrie seems to be making about some forgotten X Factor contestant's insistence that "Elounor is real". Do not care. Bring me death.
Marvel: I'm sure you've all seen this, but Woo! New Captain Marvel trailer! (I'm coming off as a more hardcore MCU fan than I am, I've realised. Mostly I'm into Wonder Woman, Black Panther and am hoping this one's good, too.)
TumblrPurge: Fantastic post on Tumblr by Casey Fiesler about the Tumblr meltdown, adult content policies, LJ, fandom migration, etc. It includes links to her tweetstorm, a CNN article she was quoted in, and more.
Tumblrpurge: Here are some other articles about/related to Tumblrpurge and purity culture/morality shipping: Slate: "Why Did Fans Flee LiveJournal, and Where Will They Go After Tumblr?" & The Verge: The online free speech debate is raging in fan fiction, too
Tumblrpurge:


Real World Diversion
UK Politics: According to Tumblr people, the entire UK Conservative Government has been found in contempt of Parliament. And according to The Guardian, yes, yes they really have. It's legit. "MPs passed a historic motion to hold the government in contempt over its failure to release the cabinet legal advice on the Brexit deal. The shadow Brexit secretary, Keir Starmer, said the government 'has lost its majority and the respect of the house.'" BOOM. It'll be interesting to see the fallout, if any.
Climate Change: The Guardian - 'Brutal news': global carbon emissions jump to all-time high in 2018 No comment. [Insert tired.gif]


Personal
Apparently I'm now influencing Meghan Markel's style (nbd) because she 100% bought the same Aritzia Cocoon Coat that I got on sale on Black Friday HA. Not saying I'm the next influencer, buuuutttt...

Christmas shopping with brosef tomorrow. We're going in on a present for dad, I have to find something for mom and nanny, and then that's it. I'm hoping it's an in-and-out deal. Can't wait for the day my cousins and I are in charge and phase out gifts.

Personal
- I applied to two jobs yesterday. Both related to teaching/education. Both requiring cover letters and tweaked resumes. Job hunting is so time consuming!
- My grandfather has Alzheimer's and is a bit of a TV addict (I come by this honestly) so my mom and I spent 2 hours on the phone with Bell sorting out their new Fibe package and daaaaamn Canada is so fucking expensive.
- I'm very frustrated at grocery stores here. All the Free From stuff is just not as good as Sainbury's and Waitrose. :\
- Baked these gluten free banana muffins this afternoon. Not bad, actually. Less dry than I thought and decent with chocolate chips. (Note: I used Robin Hood gluten free flour.)
- I've fallen down the YouTube rabbit hole and discovered a LOT of music videos with wlw. I may have to create a masterpost at some point.

Fandom
- Marvel: Today I saw for the first time this incredible fanvid by @harleivy called Welcome to the Age of Female Superheroes. Go watch!
- Meta/Personal: Interesting meta post on slash fic and drag culture from

franzeska & my comment here
- SPN/Design: Today on things I didn't but definitely did need to know, apparently Jensen and Danneel Ackles own literally my dream home wtf (a little less wood/more white in that sitting room and I'm sold). Literally *_*
- HANDMAID'S TALE SEQUEL! THIS IS NOT A DRILL!
- The other night I finished watching The Bodyguard on Netflix and :O Review to follow!

Politics (Edition:...ffs conservatives are the worst)
- Climate Change is a thing that is happening people.
* Even CNN says so (Shout out to CNN for doing an about-face and slamming Trump since January)
* So guess what, Trump? As the Great Stephen Colbert demonstrates: You're an idiot of the first order. (Bonus: "I've heard better explanations of weather from toddlers on Benadryl.")
* And guess what, Ford? SO ARE YOU
* And of course the PC's released their Climate Change Plan today, which I'll have to read into further. But surprise, surprise, it involves funding for and deregulation of private companies. >___<
- The Oshawa GM plant is closing and I have mixed feelings. I'm YAY for the environment and NAY for Ontario.
* But let's be clear, Mr Ford: GM closing their Canadian operations because they want to build electric cars is NOT Trudeau's fault as you claim but rather is LITERALLY your fault for getting rid of our Green Energy Plan and associated funding. Fuck you.

In Other News
- Good: This is the reason I don't bother with 'influencers' -- how gullible? Rock on, Payless!
- Bad: StatsCan has announced that hate crimes increased by 47% in Ontario in 2017 and that the "increase was largely tied to more hate crimes targeting the Muslim (+207%), Black (+84%) and Jewish (+41%) populations". I'm not even surprised since this world is going to hell in a burning dumpster.

I prescribe a lot of tea and baked goods while listening to holiday tunes and blocking the world out today.
( Collapse )

I have been making my way through

hd_erised and have decided I ought to share my favourites thus far.

noeon
Summary: A hideously mauled corpse is found sprawled across the paving stones of Brick Lane in the East End of London. Inspector Harry Potter--widely believed to be the lead candidate for next Deputy Head Auror--is called in to investigate a possible magical crime. To make matters worse, his occasional lover and former school-nemesis, Viscount Draco Malfoy, now billing himself as a consulting criminologist, shows up at the crime scene to aid in the investigation of the suspicious death.

This is my absolute favourite so far and it was totally worth losing a night of sleep over. I'm probably biased because I've never NOT adored anything Femme and Noe have written and sometimes I think I have a panel of buttons on my brain that they have the user manual for. From the moment I read the summary, I suspected it was their fic and after a few paragraphs I was completely convinced. It's long as hell but if you read only one fic from this fest, make it this one. Edwardian England! Werewolves! Bonding! Knotting! Aurors! Secret Liaisons! Secret Societies! Suffragettes! It has it all. ♥

A Convenient Impracticality by

firethesound
Summary: Summary: Somehow Harry ends up agreeing to a fake relationship with his ex-nemesis-turned-friendly-acquaintance-with-benefits, except for some reason it involves an awful lot of actual dating and, sadly, not much sex. Confused? Harry is too, but when has anything with Draco Malfoy ever been as straightforward as it seems?

I'm a sucker for friends-to-lovers and pining and fake-dating-becomes-real-dating tropes.

lokifan
Summary: Harry loves being an Auror. He loves it less when the Aurors start taking on the trainees for a few weeks of on-the-job training. As it turns out, Malfoy wants to be an Auror too.

I'm a sucker for Auror!fic and H/D overcoming their differences through snark.

I Bet That You Look Good on the Dancefloor by

birdsofshore
Summary: Harry felt lit up from inside as soon as he entered the bar. There were blokes dancing together, their bodies close to one another, not keeping a wary distance as Harry was always careful to do when he was near another man. God, he wanted this – wanted it so much he could taste it, a metallic tang of heat and desire. He suspected nothing would ever be the same again – especially when he saw who else was in the room.

eidheann_writes
Summary: Life after war is nothing like Draco expected. He only hopes he'll survive it. Especially when his friends are less than sympathetic.

In The Wee Small Hours of the Morning by

sassy_cissa
Summary:Fourteen years ago Harry and Draco had one night together. It takes a stunt from Scorpius to bring them back together.

Sweet pining and misunderstandings and snotty little kids and awesome!Pansy.

There are still several I need to get through, but these were a nice reintroduction into H/D fic. Enjoy!

I'm off to an indie gig with a few friends. I hope you all have a smashing Friday night.

Harry traced his finger along one of the lines, until it could go no further. “Walthamstow Central. How do you even say that?”

“Wall-tham-stow, I think. I don't know. What's in Walthamstow, anyway?”

“No idea. Have you been there?”

“No, but if you like going places we can't even pronounce, it's perfect.”

- I Bet That You Look Good on the Dancefloor by Anonymous

When you're reading a fic and Harry Potter takes Draco Malfoy to your old Tube stop while quoting One Direction songs.

I'm already terrible at blogging every day, although I've been on Tumblr so that counts? :\

Heading back to Ottawa in a few. Just waiting on my friend to pick me up. Have a travel mug full of tea and way too much stuff. My parents bought me a new spice rack and an itty-bitty vacuum for Christmas (lol you know you're getting old when) plus I have a little weekend duffle full of other gifts, and a massive suitcase of clothes and boots. A bit ridiculous and Ben is going to laugh at me.

Found out last night that we were leaving today instead of tomorrow, so it was hectic. Managed a chiro appointment yesterday, though, so my back is at least back in alignment for me to get back into being active. If anyone's in Ottawa, send me a message!

Things I found interesting/funny yesterday:
- Apparently there's a new blogging platform being developed by fans for fans. It's called Pillowfort.io and the developers say they're going to (try to) make it the best possible mashup of LJ and Tumblr. INTRIGUING.
- Daisy Ridley and John Boyega are the cutest bff's.
- Star Wars TFA fandom is awesome and hilarious.
- I love Daisy Ridley.
- TBT: Louis Tomlinson is everything.
- National Geographic posted its list of Top Ocean Conservation Wins of 2015.

I'll post again this evening when I'm back at my flat. I have a MILLION fanfic tabs open and a BILLION favourited. I plan to just turn them into a rec list so I don't have to have so many favourites folders!
Collapse